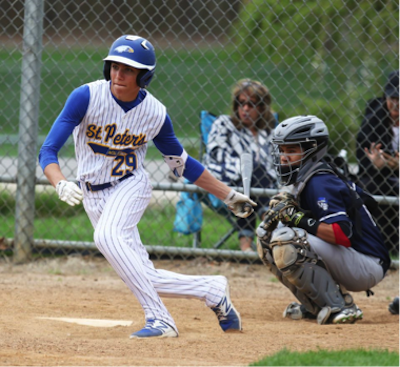 The Staten Island Advance reported on St. Peter’s baseball team and new head coach last month. Here’s what they had to say.

Bobby Glennerster is taking over as the new coach for the St. Peter’s, but it’s far from his first coaching gig.

Glennerster was head coach for New York University for a season in 2012 before leaving for the FDNY, an assistant coach for St. Joseph’s College and spent the last five years with the College of Staten Island as assistant coach and recruitment coordinator.

“I’m excited for the season because this group of guys are buying in,” said Glennerster. “It’s a tough thing to takeover and have kids who have been in the program for a few years and I commend them for buying into what I’m doing so fast and it’s exciting to see it on the field because this is my first time seeing these kids and I’m excited to see what we put together.”

Glennerster believes that pitching and defense to the Eagles’ success this season.

Seniors ready to lead the Eagles

Alex Diamantis, senior outfielder and lead-off hitter, has stepped up as a leader for the Eagles.

“Alex is a natural leader,” said Glennerster. “He’s like having another coach on the field. What he does on the field can change the game the way he runs, steals bases, he’s constantly on base, he hits for average and he can hit for a little bit of power.”

Shortstop Devin Tait has developed and will hit at the top of the lineup.

“Devin is really starting to turn a corner offensively which is a bonus for us because when I first got the job he was more of a defensive shortstop,” said Glennerster. “I expect production from defense and offense and he has taken a leadership role.”

Tyler Spitzbarth will be the Eagles’ No. 1 starting pitcher.

“A lot of our success this year will be based off what Tyler can do,” said Glennerster. “Tyler is our go-to guy he’s going to be our big game pitcher. He has so far shown tremendous ability to command the strike zone, mix speeds, he’s not scared when he’s on the mound he has a bulldog mentality which every good pitcher needs.”

Luke Smieya is set to be the starting catcher for St. Peter’s.

“We need Luke to be a rock behind the plate for us,” said Glennerster. “He’s really excelling on blocking the ball and throwing with success he’s a quiet leader, leads by example and he’ll hit in the middle of the lineup as well.”

The Eagles proved it Friday by blowing past previously unbeaten Archbishop Stepinac, 9-5, in a CHSAA contest at the College of Staten Island.

St. Peter’s, the doormat of the Island CHSAA standings the past few years, improved to 3-1 in the league and 8-4 overall. Stepinac dropped its first league game in five outings.

“Stepinac is a very good team,” said Glennerster. “The thing that I was most happy about was that every time they scored, we responded. I was very pleased with that.”

Glennerster was referring to the fact that Stepinac took a 2-0 lead in the second inning, but his squad answered with three runs in the home second.

Then when the visitors scored three more times over the next two innings, St. Peter’s scored four times.
Leading 7-5, the Eagles scored twice more in the home fifth to put away the game.

Shortstop Devin Tait (1 for 2, walk, 3 RBI) and Frank Cullen (1 or 3 with 2 RBI) did most of the damage.
Winning pitcher Joe Caggiano pitched six solid innings, scattering seven hits and allowing only three earned runs. He struck out six. “Joe was tremendous for us today,” said Glennerster. “He was mixing up his pitches extremely well and our defense played well. Joe got into a few situations and he really kept his composure and got us through it.”

John Karasinski closed out the game in the seventh inning.

Glennerster says he’s not surprised by the early-season success of his Eagles.

“I think it is important that all of the players throughout our program are buying into what our coaches are trying to instill in them,” said Glennerster. “They want to learn and be a part of a culture. We are prepared, and the players are performing well.”