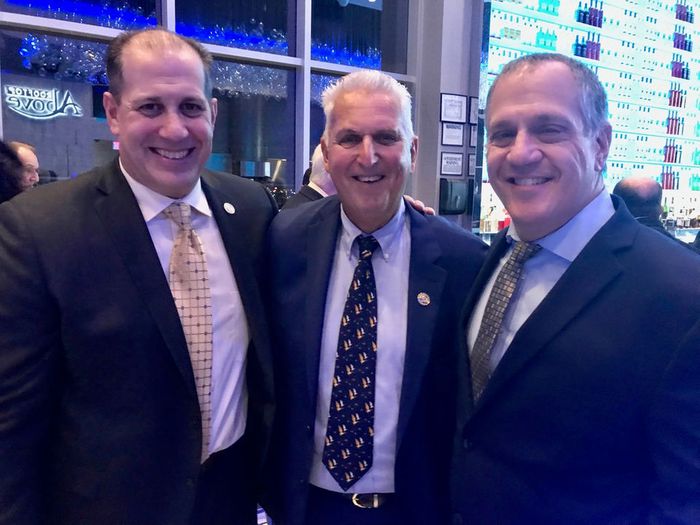 The newly established St. Peter’s Boys High School Hall of Fame’s Inaugural Induction Celebration staged in the ABOVE at the Hilton Garden Inn over last weekend, saw hundreds of alumni and friends gather at the Bloomfield venue to mix, mingle and reminisce about the days when they walked the halls of the New Brighton school.

During the event honorees nominated by alumni and board members and selected by a committee for demonstrating a level of loyalty, dedication, generosity, leadership, ambassadorship and service to the school, received the Golden Eagle Award.

The purpose of the St. Peter’s Boys High School Hall of Fame is to formally recognize alumni, Catholic leaders, parents, teachers, administrators and friends who help define and advance the mission of the New Brighton school.

Each year the president of the school will lead a committee of senior administrators seeking nominations for two prestigious awards: Golden Eagle and Honorary Alumni.In addition, inducted as Honorary Alumni were: the Brothers of the Christian Schools, District of Eastern North America; Lucille and Jay Chazanoff; Lois and Richard Nicotra, and Bishop John J. O’Hara, Episcopal Vicar of Staten Island.

“The evening once again exceeded all expectations,” said John Fodera, president of St. Peter’s Boys High School and former principal. “The tradition and camaraderie of alumni dating back to the Class of 1944 was great to witness. The honorees exhibited such a great influence in the lives of so many both at St. Peter’s and in the Staten Island community.

We were privileged to be able to acknowledge them at this Inaugural Hall of Fame. We are thankful not only to all who attended but to the many who contributed so generously to the Endowment Program attached to this event which was initiated at St. Peter’s with our Centennial Celebration just over a year ago.

We look forward to another century of success and good fortune in educating the young men of Staten Island.”