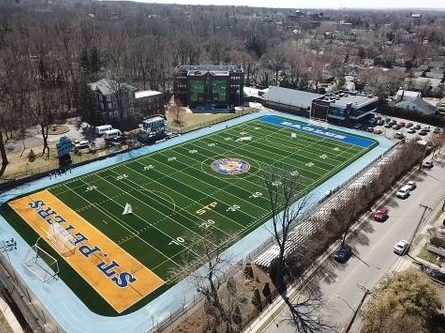 Dave Barrett is fully aware that he’s in a unique situation at St. Peter’s.

Because let’s face it, the average student-athlete at any school very rarely gets to take part in a first-year program.

First year, as in, starting from scratch.

“I’m really happy with the way the boys have been working hard at practice,” was the way the junior put it Wednesday shortly after his Eagles lost their inaugural varsity lacrosse match via a 10-3 non-league decision to visiting John Dewey in New Brighton. “They want to get better and to me, it shows.”

St. Peter’s announced late last spring that it would add lacrosse as varsity and junior varsity sports and, according to principal Michael Cosentino, the school soon after hired highly recommended coach Pat Clyne to run the program.

Barrett, who is not only captain, but scored the program’s first goal ever Wednesday, is one of only three players on SP’s roster with prior experience on the lacrosse field. Clyne, as it turns out, is building a foundation from the ground up.

“I have all the players, as well as the rest of the school, buying into the culture (of the sport). It’s been popular and they love it,” said Clyne, a three-year varsity player at Monsignor Farrell who was an assistant at Susan Wagner the last five years before landing at St. Peter’s. “The kids have been great at practice, as well as doing things on their own after practice.

“There hasn’t been any frustration as far as I’m concerned because they have been working hard and improving every day. They’re making process.”

The Eagles, who also received goals from Joey Riccardelli and Chris Stumpf Wednesday, owned a 1-0 lead for a good portion of the first period before Dewey took control by scoring eight of the next nine goals.

The lacrosse team had the good fortune of re-opening the Eagles’ newly renovated athletic field and some players echoed their coach’s thoughts as they look to take baby steps to improve following their season-opening loss.

“I’m proud of the way coach has brought the team along and I know I have a bigger role helping the team because I do have some experience,” said Barrett, noting he first grabbed a lacrosse stick in sixth grade. “The guys understand they’re going to mess up because they’re still learning. It’s part of being (a first-year program). We just have to build off the game experience we got today and we fully intend to develop by the time the end of the season comes.”

“We’re still building chemistry, but I think (we are) because everyone has been putting in the time and looking to improve,” said senior goaltender Joe Macklin, who’s playing lacrosse for the first time. “I think we know we have to keep our spirits up. There’s going to be some rough patches this season, but if we learn as a team and have fun along the way, I think everything will turn out fine.”

Cosentino, meanwhile, was pleased to see the lacrosse team play the first game on the renovated field, which first opened in September of 2006.

“It’s an exciting day for the lacrosse program. I’m extremely happy with the progress that’s been made in making this happen,” said Cosentino, a St. Peter’s alum who’s in his second year as principal. “It was an idea that was first brought up by the students and we’re pleased to give them the opportunity to play a new sport at St. Peter’s.

“It’s gratifying because we know this is something they really wanted, as well as something that’s going to help the school.”