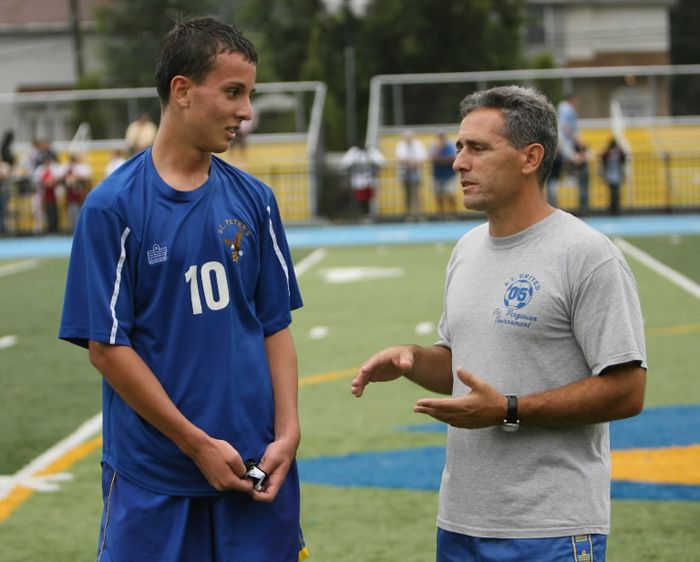 Posted at 12:29h in Eagles in the News, Updates by Brian Collins

You’d be hard-pressed to talk about the history of St. Peter’s soccer and not discuss John Liantonio.

For starters, he’s without a doubt one of the New Brighton’s school’s top players of all-time after a four-year varsity career that included back-to-back Advance All-Star selections following his junior and senior years in the mid-1980s.

More recently, he’s in the midst of a successful 21-year stint as the Eagles’ varsity coach. Liantonio, in fact, has taken part in three CHSAA Intersectional championships, including B titles as an assistant to former coach Kenny Leigh (1998) and as head coach (2006). He also guided the Eagles to the A Intersectional crown along with former co-coach Christina Monzi-Sanger in 2017.

The South Beach native is now also one win away from reaching a personal milestone as varsity coach. In fact, St. Peter’s, which visits Kennedy Catholic in Somers, N.Y., on Monday (5 p.m.), will earn his 200th career victory the next time the Eagles are victorious.

“It will be a great accomplishment when I get it, but it’s the kids that deserve credit for winning all those games,” said a humble Liantonio, who also went on to a successful playing career at the College of Staten Island. “I played for St. Peter’s and always cared about playing well and winning and now, as coach, I of course want the program to do well and we’ve had out share of success over the years.”