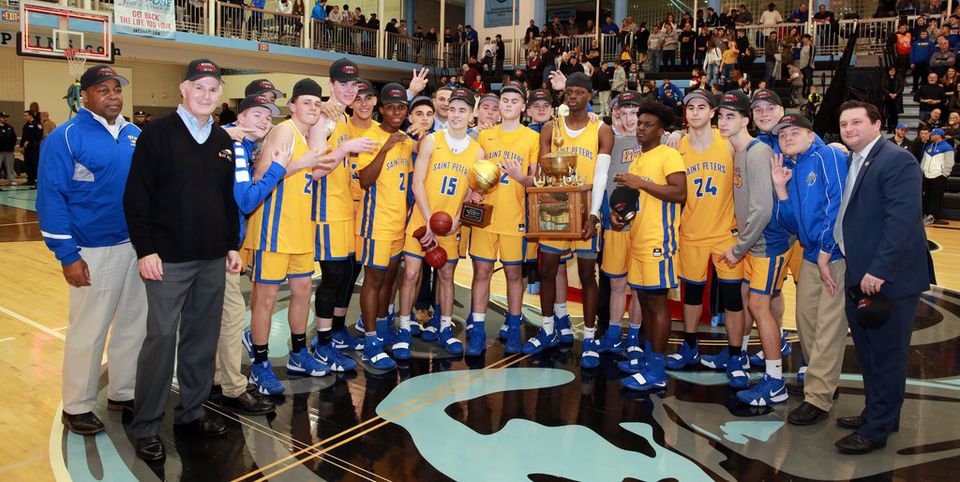 Contrary to popular belief, there was a time earlier this season when St. Peter’s Chris Clancy actually missed a few free throws at the end of a game or two.

Coach Charlie Driscoll remembers it. And said he didn’t shy away from calling out his senior co-captain on it, either.

“Sure I brought it up to him,” said Driscoll, who’s in his 18th season coaching the Eagles’ varsity. “I told him, when we’re protecting a lead, I want him with the ball and expect him to hit those key free throws to close out games.

“He said he wouldn’t miss again,” the coach added. “And, of course, it’s exactly what I wanted to hear.”

And sure enough, Clancy did indeed keep his word. Except this time, he happened to do so while on the biggest stage Staten Island’s high school basketball season has to offer.

Clancy poured in a game-high 28 points, including a 4-for-4 performance from the charity stripe in the last 20.4 seconds as the Eagles managed to hold on for their third consecutive SIHSL Tournament championship via a 61-58 triumph over Curtis Friday at the College of Staten Island.

The 18-6 Eagles not only won their Island-best 34th crown overall, but they now stand by themselves with 11 tournament titles … one better than the 20-7 Warriors. In addition, St. Peter’s became only the third team in the tournament’s 27-year history to win three straight seasons, matching Curtis (1997-2000) and St. Peter’s (2007-09). The New Brighton school has also won five times in the last six years.

Driscoll, meanwhile, continues to add to his impressive resume. The coach has now guided the Eagles to the Island title nine times in 13 championship-game appearances.

“It was a tough game and I’m proud of the way our team played under pressure,” said Driscoll. “I’m also proud of the senior leadership we got tonight. Guys like Chris, Thomas (Lotito) and Jamal (Achille) … they really kept us in control during the tense moments at the end of the game.

But it was Clancy that took center stage to cap a brilliant, three-year varsity career in SIHSL play that will now put his name among some of the all-time greats the storied program has to offer. The senior became only the second player in tournament history to earn MVP honors for a second time (the first was former St. Peter’s great O.D. Anosike.

In addition, Clancy, who was 9 for 18 from the field, 6 for 6 from the free-throw line (overall) and drained four three-pointers, became only the fourth player in tourney history to win three consecutive championships. Clancy joins Anosike and former Curtis start Terry Downing and Nigel Wyatte in that department.

“It definitely feels great to win another Island championship,” said Clancy, who, dating back to CYO play, has won an Island title for 10 consecutive seasons. “I think it all starts with the practices and the time our coaches put in at them. We practice six days a week and go hard and I think, in the end, it all paid off.”

Clancy’s 12 first-half points helped the Eagles to a 23-23 score at halftime and, thanks to Clancy and Achille’s combined 18 points, SP carried a 45-41 lead into the final eight minutes.

But the game was far from over.

Every time the Eagles threatened to get separation, the Warriors had an answer. In fact, St. Peter’s went up eight twice early in the fourth, only to have the Warriors respond with a quick basket to keep them within striking range.

However, Murphy converted an offensive rebound into the go-ahead bucket with 1:58 on the clock and 1:21 later, Achille took a pretty feed from a penetrating Lotito to again put SP up four, 57-53, with 37 ticks left.

“Even under pressure, we stayed poised,” explained Achille. “We never got rattled even after they tied the score. We fought the whole game and kept our heads with the game on the line.”

Askew’s put back cut the Eagles’ lead to two, but Clancy was fouled with 20.4 seconds left and sank both to make it a two-possession game.

With Curtis pushing the ball upcourt, AJ Ingleton received a pass in the left corner and nailed a three to make it 59-58 with 11.5 ticks left.

Clancy, however, did a solid job fighting his way to getting open on the ensuing inbounds pass and after he took a pass from Lotito, he was again immediately fouled.

Now with 10.7 ticks left, the senior sharp-shooter again hit nothing but the bottom of the net to give the Eagles a 61-58 lead.

After draining 8 of 8 free-throw attempts in the waning minutes of Tuesday’s 56-48 semifinal win over Monsignor Farrell, Clancy said he wasn’t nervous.

But with the weight of yet another Island title in the balance, he admitted to feeling the heat a bit.

“There’s a little bit of nervousness with the game, the championship, on the line, but I got ice water in my veins,” he said with a smirk. “You got to knock them down. That’s it.”

“There’s no doubt in my mind he was going to hit them,” the coach said of Clancy, who added five rebounds, three assists and took a charge. “He’s quiet, but tough. He can shoot, get to the basket and when we need him to, he hits key foul shots.”

Curtis got two cracks of a game-tying three, although under duress, from Ingleton and Robbie Mitchell in the final seconds, but the shots were off the mark, thus giving the Eagles yet another SIHSL championship.