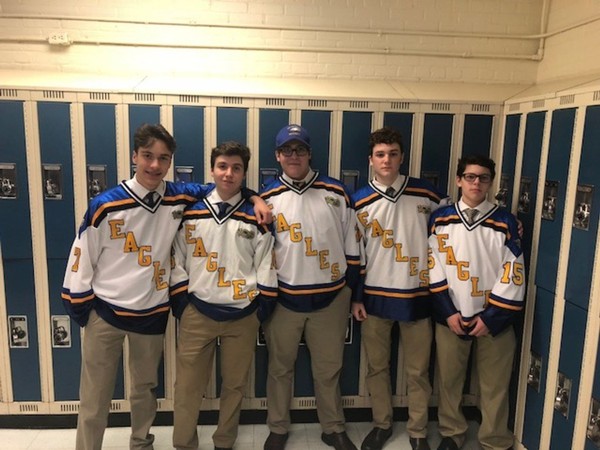 Posted at 12:24h in Eagles in the News, Updates by Brian Collins

The desire to do good works ingrained in Staten Island’s sports community will be on display again Dec. 5 at the Staten Island Skating Pavilion when St. Peter’s and St. Joseph by-the-Sea turn their Catholic HS Hockey League game into a fundraiser to support breast cancer awareness.

The teams are partnering with JAG-ONE Physical Therapy to support breast cancer awareness and the Staten Island Breast Cancer Research Initiative (SIBCRI).
Jag-One is providing pink jerseys for the teams for the 8:30 p.m. game which will honor two breast cancer survivors and feature a 50/50 raffle, dozens of raffle prizes and commemorative gear available for purchase all with giving in mind.
Jag-One marketing manager Michael Mauro, the College of Staten Island’s head baseball coach and a St. Peter’s hockey dad, is organizing the event. The idea for the game came with fellow Eagle dads Jerry Burt, Joe Martino, Jim Wessels, and Rich Pignatelli.

Mauro’s CSI baseball team is actively involved in several charitable causes, most notably the HS Senior Baseball Game which promotes autism awareness and the Grace Hillery Breast Cancer Awareness Night during the CSI baseball season. That event has raised over $70,000 since its inception in 2004.

“With the crowds for Staten Island hockey games rather thin, we brainstormed an idea to boost attendance while also raising money for a great cause, similar to our baseball event that has been incredibly well-received,” said Mauro. “Bringing the idea to Jag-One and the community, the response was overwhelming, and we’ve gotten so many people on board ready to make the event a success.”

Mauro noted that principal Michael Cosentino of St. Peter’s and Frank Cafaro, who helps with the program, along with athletic director Patricia Mulligan embraced the concept, as did Sea’s AD Rich Bruno. Head coaches Ed Blackburn of St. Peters and John Lopresti of Sea are happy their teams are getting involved for a great cause and eager to lend to the spirit of giving.

Tickets are free to the event with gates opening at 7:30 p.m. Spectators will receive pink ribbons and cushioned hockey pucks for free and can take part in dozens of raffles that include signed sports memorabilia from hockey Hall of Famer Martin Brodeur and New York Rangers goaltender Henrik Lundqvist, tickets for Devils and Rangers hockey teams, the New York Knicks and the New York Yankees, Vapor hockey sticks, restaurant gift certificates, and many more.
Prior to faceoff, members of Jag-One Physical Therapy will welcome guests of honor Jane Rogers of the Staten Island Yankees and Pete Botros, owner of Stone House restaurant, both breast cancer survivors and outspoken advocates of awareness and early-screening.

“One thing about the Staten Island community is that we support one another in times of need,” said Mauro. “Breast cancer is an epidemic on Staten Island, and the more informed we are and the more we can support local organizations that make it their priority to help every day in the face of the disease is a great thing. It’s going to be a great night of hockey, made even better by the incredible support of JAG-ONE and the community that will support the cause.”

The SIBCRI based at the College of Staten Island’s Center for Environmental Science, is manned by doctors and scientists who organize a multidisciplinary approach aimed at making a positive impact on breast cancer incidence and mortality specific to Staten Island.

For more information on the game, to make a donation, or to sponsor a giveaway call (347) 288-5609 or visit JAG-ONE Physical Therapy on the web at www.jagonept.com. All checks can be made payable to One-on-One Charitable Foundation.