From one alumni to another: Mike McHugh (’85) leads charitable effort to support nonprofit led by fellow Eagle alum 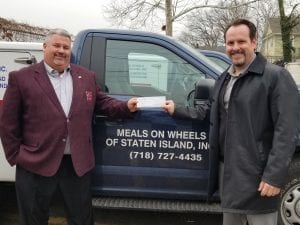 Pictured: Mike McHugh (’85), past Grand Knight and Staten Island Chapter President of the Knights of Columbus presenting a check for $400 to Mark Russo (’85) board chair for Meal on Wheels.