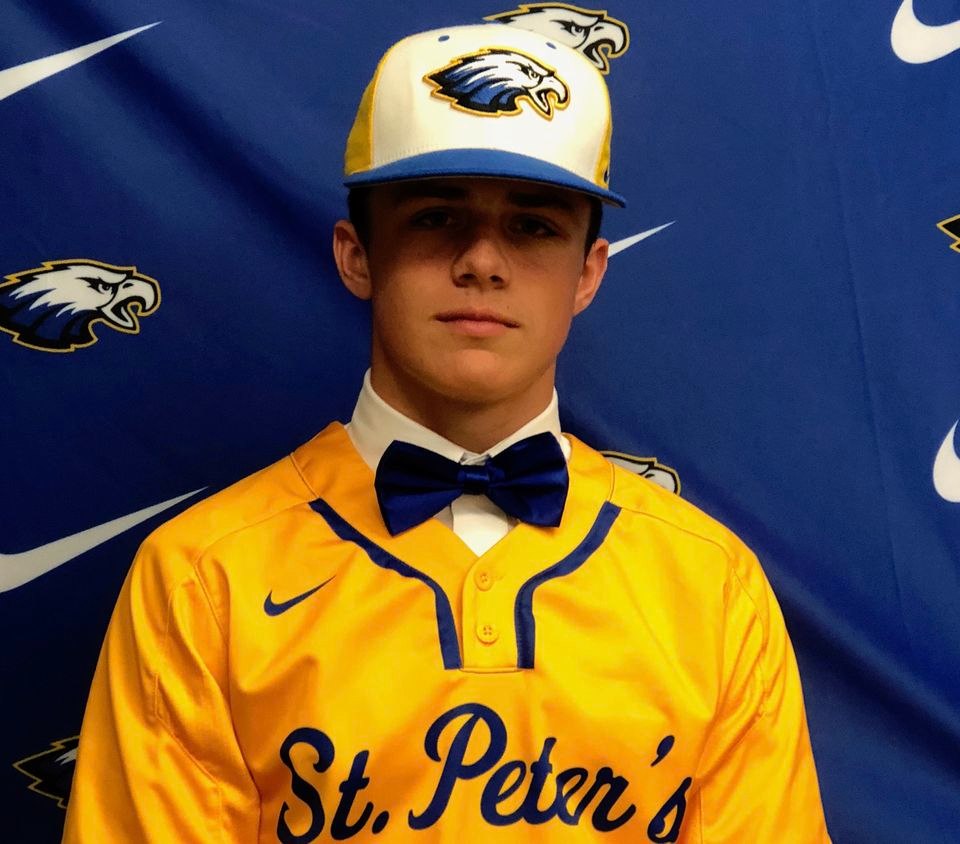 Posted at 15:28h in Eagles in the News, Updates by Brian Collins

St. Peter’s right-hander Matt Bedford verbally committed to the University of Notre Dame on a half athletic scholarship, the Advance has learned.

Bedford, a Moore Catholic transfer who has yet to play a regular-season game for the Eagles (he had to sit his sophomore year as per transfer policy), accepted a 50-percent scholarship offer from ND head coach Mik Aoki on Wednesday evening.

Although Bedford is expected to play the field and hit when he’s not pitching for the Eagles, he will solely be a pitcher for the Irish.

Bedford got a taste of life at the South Bend, Ind., school when St. Peter’s varsity coach Bobby Glennerster accompanied him to a weekend trip to Notre Dame in early September.

“I got to meet the coaching staff and I really liked the atmosphere after touring the school. The campus is second to none,” said the 15-year-old Bedford, who plays travel ball for the Staten Island Orioles. “The facilities are amazing. It’s a place that will help me be the best I can be.”

“Coach Glennerster had a contact with Notre Dame’s pitching coach (Chuck Ristano) and I was put into one of the camps during my visit,” said Bedford. “If it wasn’t for coach, I wouldn’t be in the position I’m in today.”

Glennerster, meanwhile, said over 50 schools have contacted him about Bedford’s services. At the end of the day, the second-year coach believes the Fighting Irish are the best fit for him for a number of reasons.

“Even taking baseball out of the equation, it’s one of the most prestigious institutions in the country that will have him set for life when he gets his degree,” said Glennerster, noting Bedford has consistently hit between 85-88 MPH on the gun while topping off at 90 during a USA Baseball-sponsored event. “He’s 15 and still growing. With his work ethic, I see him continuing to progress. He’s got long fingers; long arms; an easy delivery and he knows how to compete … they love his competitiveness.

“It was a long, intense process finding the right school, but I think he made a very good decision.”

Bedford uncorked pitches to five different batters during a throw session in front of ND’s coaching staff during the visit. He said his fast ball (velocity) was down a bit, but overall he felt he did a good job.

“It wasn’t a real game. There weren’t any fielders behind me,” said the right-hander. “I felt pretty good out there though. Nobody got a hit. I struck out two and got a few pop-ups as well.”

Bedford, who said he plans on signing a National Letter of Intent in November of 2019, said Notre Dame’s coaches like several things about him. In addition to the fact he’ll be graduating early and his competitive nature, he said they also like the way he throws his fastball and that he can throw his change-up as an out pitch.

“They said they’re not heavy on pitching and that I can make an impact right away,” the Westerleigh resident said. “I might be a reliever (initially), but I could work my way into being a starting pitcher as I progress. The best guys will play and if I prove I can do it, I’ll get a shot.”

The 6-foot, 175-pound Bedford, who plans on majoring in either business or human science, received serious interest from George Washington, Stetson, Elon and Rutgers.

There’s been a whirlwind of activity for the Bedford family in recent months. Matt Bedford’s brother, Chris, was a member of the Mid-Island Little League team that made the trip to Williamsport, Pa., for the Little League World Series in August. Bedford’s father, Al, was a coach for that team.

Al Bedford was thankful Glennerster was available to help Matt as he was being recruited.

“Bobby was instrumental in this happening to my son,” said Al Bedford. “Without him, it wouldn’t have happened. He helped get him exposed and took him on the trip to Notre Dame, which enabled their coaching staff to get a good look at Matt.”

See article and gallery on SILive.com